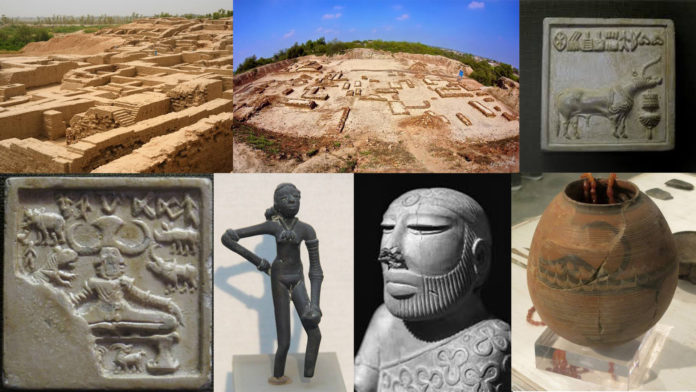 Initially, people lived in groups, then they formed communities out of these groups and then evolved the societies which are due course become civilizations. People preferred to settle near the rivers. The earliest excavations in the Indus valley were done at Harappa in West Punjab at the year 1921 and Mohenjodaro at Sindh in 1922. Both places are now in Pakistan.

Findings in two cities brought to light a civilization. In the beginning, it was called “The Indus Valley Civilization”, due to the discovery of more and more sited far away from the Indus valley this civilization was later named “Indus Civilization”. Also, it has come to be called the “Harappan Civilization” after the name of its first discovered site. The ruins of Mohenjodaro were designated a UNESCO World Heritage site in 1980.  Built around 2500 BCE, it was one of the largest settlements of the ancient Indus Valley Civilisation, and one of the world’s earliest major cities, contemporaneous with the civilizations of ancient Egypt, Mesopotamia, Minoan Crete, and Norte Chico.

In 1931, Sir John Marshall estimated the duration of the occupation of Mohenjodaro between 3250-2750 B.C. Subsequently, as and when new sites were discovered, the dating of Harrapan culture is modified. The advent of the radiocarbon method paves way for fixing almost accurate dates . By 1956, Fairservis brought down the dating of Harrapan culture to between 2000 and 1500B.C. on the basis of radioca4rbon dates of his findings. In 1964, D.P Agarwal came to the conclusion that the total span of this culture should be between 2300 and 1750 B.C. Yet, there is a further scope of modification of these dates

The archaeological findings excavated for the last eight decades reveal the gradual development of the Harrapan culture. there are four important stages or phases of evolution and they are named as pre-Harrapan, early -Harrapan, mature -Harrapan and late -Harrapan.

The pre-Harrapan stage is located in eastern Baluchistan. The excavations at Mehrangarh 150 miles to the northwest of Mohenjodaro reveal the existence of pre -Harrapan culture. In this stage, the nomadic people began to lead a settled agriculture life In early -Harrapan stage, the people lived in large villages in the plains.

There was a gradual growth of towns in Indus Vally. Also, the transition from rural to urban life took place during this period. The sites of Amri and Kot Diji remain the evidence for the early-Harrapan stage.

In the mature -Harrapan stage, great cities emerged. The excavations at Kalibangan with its elaborate town planning and urban features prove this phase of evolution

In the late -Harrapan stage, the decline of the Indus Culture started. The excavations at Lothal reveal this stage of evolution. Lothal with its port was founded much later. It was surrounded by a massive brick wall as flood protection. Lothar remained an emporium of trade between the Harrapan civilization.

The Harappan culture was distinguished by its system of town planning on the lines of the grid system that is streets and lanes cutting across one another almost at right angles thus diving the city into several rectangular blocks .

Harappa, Mohenjodaro and Kalibangan each had its own citadel built on a high podium of mud brick. Below the citadel in each city lay a lower town containing a brick house, which were inhabited by common people.

The large -scale use of burnt bricks in almost all kinds of constructions and the absence of stone buildings are the important characters of the Harrapan culture.

Another remarkable feature was the underground drainage system connecting all house to the street drains which were covered by stone slabs or bricks.

The most important public place of Mohenjodaro is the great bath measuring thirty-nine feet length, twenty-three feet breath and eight feet depth. Flights of steps at either end lead to the surface. There is a side room for changing clothes. The floor of Bath was made of burnt bricks. Water was drawn from a large well in an adjacent room, and an outlet from one corner of the Bath led to a drain . It must have served as a ritual bathing site.

The largest building in Mohenjo-Daro is a granary measuring one fifty feet long and 50 feet breadth. But in the citadel of Harrapa, we find six granaries

There was great progress in all spheres of economic activity such as agriculture, industry and crafts and trade. Wheat barley were the main crops grown besides sesame, mustard and cotton. The surplus grain is stored in granaries. Animals like sheep, goats and buffalo were domesticated. The use of horse is not yet firmly established. A number of other animals have hunted food including deer.

Specialized groups of artisans include goldsmiths, brick makers, stone cutters, weavers, boat builders and terracotta manufactures. Bronze and copper vessels are outstanding examples of Harrapan metal craft. Gold and silver ornaments are found in many places. Pottery remains plain and in some places, red and black painted pottery is found. Beads were manufactured from a wide variety of semi-precious stones.

There is much evidence to prove the trade links between the Indus and Sumerian people. Many seals of Indus valley have been found in Mesopotamia . Trade was the barter type, the seals and terracotta models of the Indus valley reveal the use of bullock carts and oxen for land transport and boats and ships for river and sea transport.

Much evidence is available to understand the social life of the Harappans. The dress of both men and women consisted of two pieces of cloth, one upper garment and the other low3er garment. beads were worn by men and women .pieces of Jewellery such as bangles, bracelets, fillets, girdles, anklets, earrings and finger rings were worn by women. These ornaments were made of gold, silver, copper, bronze and semi-precious stones. The use of cosmetics was common. Various household articles made of pottery, stone, shells, ivory and metal have been found at Mohenjodaro.

Spindles, needles, combs, fishhooks, knives are made of copper . Children’s toys include little clay carts . Marbles, balls and dice were used for games . Fishing was a regular occupation while hunting and bullfighting were other pastimes. There were numerous specimens of weapons of war such as axes, spearheads, daggers ‘ bows, arrows made of copper and bronze.

The Harrapan sculpture revealed a high degree of workmanship. Figures of men and women, animals and birds made of terracotta and the carvings on the seals show the degree of proficiency attained by the sculptor.

The figure of a dancing girl from Mohenjodaro made4 of bronze is remarkable for its workmanship. Its right-hand rests on the hip, while the left arm covered with bangles, hangs loosely in a relaxed posture.

The statue of a bearded man was found in Mohenjo -Daro .its figure made of Steatite . It interpreted as a priest and draped in a shawl. Two stone statues from Harappa, one representing the back view of a man and the other of a dancer also specimens of their sculpture.

The Pottery from Harappa is another specimen of the fine arts of the Indus people. Pots and jars were painted with various designs and colours.

The Harappan script has still to be fully deciphered. The number of signs is between 400 and 600 of which 40 or 60 are basic and the rest are their variants . The script was, mostly written from right to left. In a few long seals, the boustrophedon method [writing in the reverse direction in alternative] lines was adopted. Parabola and his Scandinavian colleagues came to the conclusion that the language of Harrapans was Dravidian. A group of Soviet scholars accepts this view. Other scholars provide different view connecting the Harrapan script with that of Brahmi

From the seals, terracotta figurines and copper tablets we get an idea on the religious life of Harappans. The chief male deity was Pasupati(Proto Shiva) represented in seals as sitting in a yogic posture with three faces and two horns. He is surrounded by four animals. The chief female deity , was the mother goddess represented in terracotta figurines. In later times, Linga worship was prevalent. Trees and animals were also worshipped by Harappans. They believed in ghosts and evil forces and used amulets as protection against them. They used a bull seal for packing or positive imprint.

The cemeteries discovered around the cities like Mohenjodaro, Harappa, Kalibangan, Lothal and Rupar throw light on the burial practice of Harappans. complete burial and post-cremation burial were popular at Mohenjodaro. At Lothal the burial pit was lined with burnt bricks indicating the use of coffins. Wooden coffins were also found at Harappa. The practice of pot burials was found at Lothal, sometimes with pairs of skeletons.

The decline of the Harappan Culture

There is no unanimous view of pertaining to the cause for the decline of the Harappan culture. Various theories have been postulated. Natural calamities like recurring floods, drying up of rivers, decreasing the fertility of soil due to excessive exploitation and occasional earthquakes might have caused the decline of Harrapam cities. According to some scholars, the final blow was delivered by the invasion of Aryans. the destruction of forts is mentioned in the Rig Veda. Also, the City was invaded by foreigners. The Aryans had superior weapons as well as swift horses which might have enabled them to become masters of the region