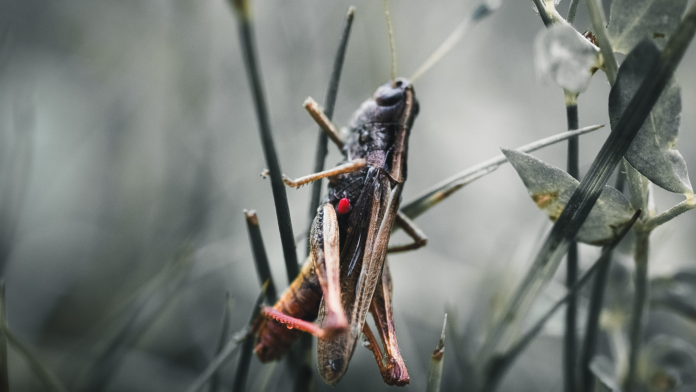 Locusts are from the family of Acrididae in the Orthoptera order, they are the collection of short-horned grasshoppers species that have swarming phase. They usually live in individual space, but under some situation, they gather in a large quantity as a society and in crowded condition, there will be a change in their behavior, habits, morphology, appearance, physiology and ecology change progressively (over several generations), a shift known as a phase change. They are large herbivorous insects that can be serious issues to farmers. Locusts can live about three to five months and it depends on weather and ecology condition. Locusts do not attack people or animals. Locust females lay an egg in sandy soils at depth of 10-15cm below the surface, they can lay about 95-158 eggs at intravel of 60-11 days in their lifetime, they lay eggs three times in their lifetime.

Locusts are a great threat to agriculture and food security, they feed on leaves, fruits, flowers, shoots and seeds. Locusts eat nearly all crops and non-crop plants like paddy, wheat, millet, sugarcane, maize, sorghum, barley, grasses, fruits, date palms, banana leaves, vegetables, weeds, cotton and many edible plants. Crop loss from locusts was noted in many holy books like Bible and Qur’an, from these ancient books we came to know these locusts are a great threat to farmers from the ancient time.

One kilometer of  locust swarm contains more or less to 40 million locusts, they can eat more than 35,000’s food  in a day. Swarming is conducted due to overcrowding of locusts. Locust plague was take placed in Yemen, Iran, Kenya, Ethiopia, Somalia, Saudi Arabia, Iraq, UAE, Oman, Sudan, Iran,  Pakistan, and in Indian border, they created disaster where they have been traveled.        There are some difficulties to control them because they spread to  16-30 million sq km  , it is difficult to access remote areas, the insecurity , undeveloped  basic structures ,and limited resources .

In the ancient Egyptian carvings of the period 2470 to 2220 BC, they carved locusts on their tombs, and in the Bible, they listed a highly destructive plague in Egypt around 1446 BC. In the Quran plague of locusts was mentioned in it. In the Iliad (Ancient Greek epic poem by Homer) he mentioned locust taking to the wing to escape the fire. In 311 AD northwest provinces of China were affected by the plague and in 19th century BC, Chinese appointed anti-locust officers. Aristotle studied locusts and their breeding habits and in 203 BC Livy recorded a plague in Capua

Prevention of Crops from Locust Swarm

Organophosphate insecticides are applied in small concentrated doses  can be sprayed  by vehicle , aerial spray  , power sprayer and hand-held sprayer. There also non – chemical ways to kill some locusts , they can be killed by natural predators and  parasites but  they can  migrate  from the natural predators. In  past they used giant nets, flames, huge vacuums  but they don’t make more effect .