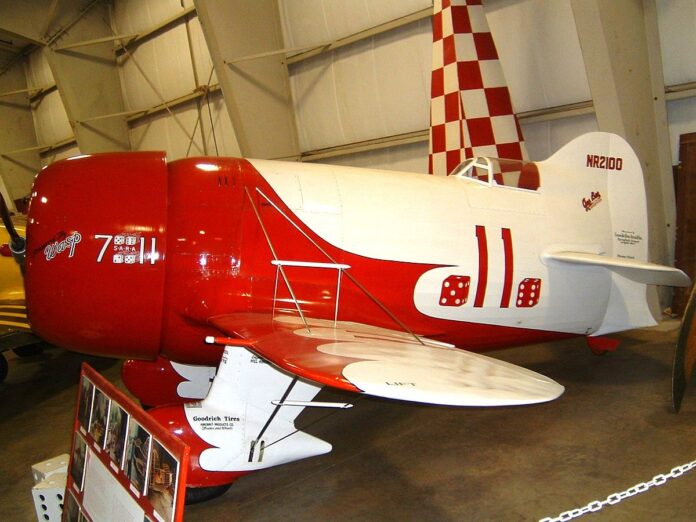 After the end of World War I, many pilots turned their flying skills to entertaining the public at air shows. During the 1920s, air races were all the rage, with daredevil pilots risking it all for big-money prizes. A new breed of airplane emerged, designed purely for speed. Ever larger engines were crammed into smaller and smaller fuselages. Among the most famous race planes were the Gee Bee Super Sportsters, built by Granville Brothers in Springfield, Massachusetts. The four brothers began making two-seat biplanes for private use, but then switched to racers. The most famous of these were the R-1 and R-2 Super Sportsters.

The R-1 was nothing more than an enormous engine bolted onto a tiny body. In 1932, Major James Doolittle piloted the R-1 to victory in the Thompson Trophy race, flying laps around a circuit marked out by pylons. The R-1’s sister plane, the R-2, looked almost identical. It had a slightly less powerful but more fuel-efficient engine than the R-1, and a larger fuel tank, allowing it to fly long-distance races with fewer refuelling stops. This gave it a better average speed. All the Granville Brothers’ racers were successful, but only the most skilled flyers could handle them. Over the space of four years, seven Gee Bee racers crashed, killing five pilots, leading to the company stopping production.

The planes were believed to be dangerous-and they were. Both the R-1 and R-2 crashed in 1933. The parts were salvaged and reused in the form of the R-1 and R-2, which had a larger fuel tank set farther back than before. This upset the plane’s balance, making it impossible to control-it crashed on its first flight killing its pilot, Allen Granville.

Optical Fibers – A Revolution in Communication.