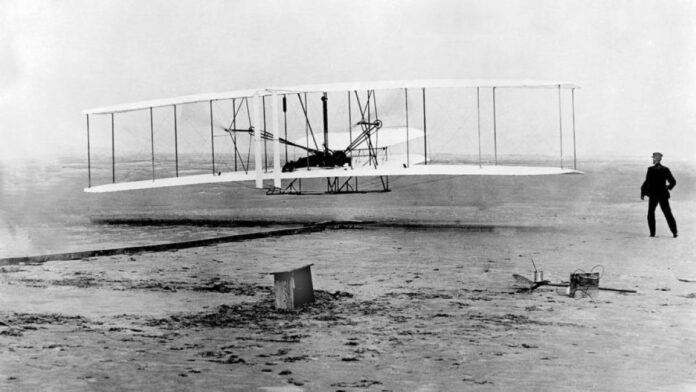 On December 17, 1903, Orville and Wilbur Wright, two bicycle engineers from Dayton, Ohio, launched the Flyer from sand dunes above the windswept beach at Kitty Hawk, North Carolina. Mounted on a small cart with Orville at the controls, the Flyer’s engine kicked into life, spinning the propellers. Orville released the brake and the Flyer raced along the 50-ft (18-m) take off track, straight into the wind.

There were cheers as the Flyer lurched up into the air. It rose to a height of about 9ft (3m) and travelled for 100ft (36m) before plunging down onto the sands. It was nothing more than a “hop,” but it marked the beginning of the age of the airplane.

For the Wright brothers, getting an airplane into the sky was only half the challenge. The next problem was how to steer it once it was airborne. The Wright brothers used a vertical rudder to make the body of the Flyer swing to the left or right, but to tilt the wings so that the aircraft could bank, or “roll,” in a smooth turn was more difficult.

Wilbur designed a system of control wires that twisted the rear edge of the wing tips slightly when pulled. This “wing-warping” changed the flow of air over the wings and tilted them, so that the Flyer could bank. Today, hinged ailerons do the same job.