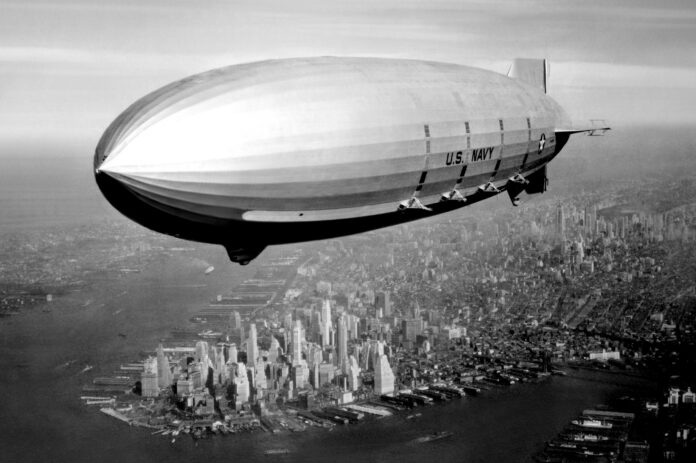 Airships are lighter-than-air craft which have engines and steering mechanisms. Early airships, built in the late 1800s, were cloth-covered, cigar-shaped gas bags similar to modern blimps, which kept their shape because the gas inside was under high pressure. If the bag sprung a leak, the shape was lost and the airship became difficult to control. So a new type of airship, the “rigid” was developed, with a strong internal framework made of lightweight metal alloys. Rigid airships were used in World War I for reconnaissance missions and bombing raids. After the war, they were used to carry passengers on long-distance journeys

In the mid-1930s, airships established the first regular transatlantic air services. Airship travel was expensive and only a small number of passengers could be carried at a time. But airships crossed the Atlantic twice as quickly as the great ocean liners, and the passengers enjoyed an equal level of comfort.

Measuring 670ft (245m) long-three times the length of a modern jumbo jet- the German airship Hindenburg was the largest craft ever to take to the skies. On a 50-65-hour transatlantic trip it could carry up to 50 passengers in spacious and luxurious accommodation. The crew usually numbered between 50-60, including 10-15 stewards to look after the passengers’ needs. The Hindenburg flew for the first time in 1936, and made 18 successful transatlantic trips in all.

It took off on its last voyage from Frankfurt, Germany, on May 3, 1937. Disaster struck when it arrived at Lakehurst, New Jersey on May 6. Suddenly, the Hindenburg caught fire and exploded in a ball of flame, killing 35 of the 97 people on board. The tragedy signalled the end of the airship age, and these vast giants of the skies were soon replaced on transatlantic voyages by seaplanes.