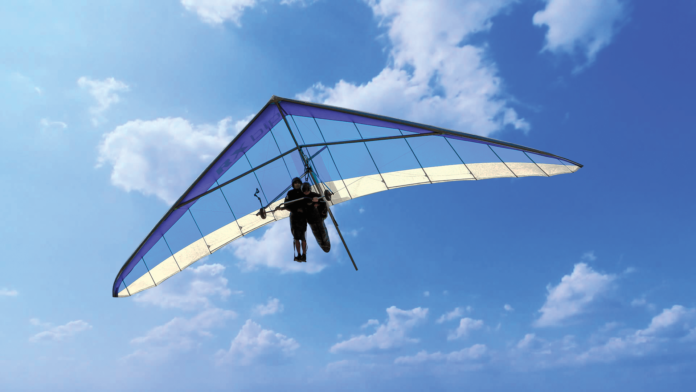 The closest you will ever come to flying like a bird is to take to the air in a hang glider. These kitelike craft are basically large wings, made of fabric stretched over a simple frame. There is no fuselage, so the pilot hangs underneath the wing in a special harness called a body bag. The whole structure is so simple that it can be put together or folded away in a few minutes. When dismantled, it can easily be carried on the roof rack of a car. Hang gliders are used for leisure, for racing or performing stunts, or just for enjoying the thrill of soaring above the ground.

To launch a hang glider, the pilot runs into the wind from the top of a steep hill and is lifted by the wing. There are no rudders, ailerons, or elevators, so the pilot holds the control bar and steers by moving his or her body, which then moves the wing. Pushing the bar forward makes the hang glider climb, pulling on it makes it descend. Turns are made by shifting the body from side to side. Experienced pilots soar on currents of rising warm air called thermals.

To cover long distances, the pilot makes the hang glider climb on one thermal, then glides down and rises again on the next thermal, and so on. By hitching rides on thermals, a hang glider can stay airborne for more than two hours and travel over 90mi (15Okm).